Today I am presenting another written interview with Pradeep Kumar on Game Design. Pradeep is an Engineer, MBA, Writer, Mathematician, Game Designer, and Entrepreneur who is passionate about Teaching Math through Games. He can 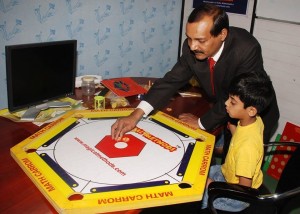 I wanted children to like mathematics. I wanted them to say that I LOVE mathematics. So I started searching for the solution. It became my mission.

To find out the solution I started interacting with mathematics teachers. After putting a mammoth effort for an year I was unable to get the input which would lead me to solution.

During the same time I started working with children. I started experimenting and found that children love to play games. Voila! I got the solution. I thought that if I can deliver mathematics teaching through games then children would like it and they would not fear mathematics.

I worked on my thought and started teaching children using games. Wherever they encountered some problem I would explain them using some game. Over a period I found that teachers and students like my game based approach of Teaching maths. Due to Games used by me they develop a very strong interest in Maths and start enjoying it.

Local Schools started calling me to train their teachers in the game based system of teaching mathematics. And thus my journey began.

Today, I use Virtual Class Room to train school teachers, Homeschooling parents, Stay at Home Moms across the World in my game based system of teaching Mathematics.

My USP is I use several games and develop it into a teaching system. All the games in the system is unique and designed specially for the purpose.

2. What are some tools you use as a game designer?
The Tool which I use for the purpose is Visualization. I visualize the game in my mind and and do rough sketching of it. Once I am satisfied with my rouch sketch and the playing methodology then I work on developing a proper sketch and prototype. We test the prototype with several group of students before producing it.

3. What are some games you have helped contribute to?

4. How have you gone about getting yourself out there to work on your various projects and passions? What’s working for you?

The game based systems developed by me are in great demand by School teachers, homeschoolers who teach primary and middle level students. In last three years I have trained more than 1500 teachers across 60 countries of the world. We train more than 300,000 students every year through them.

In 2014, I plan to reach out to parents and teachers in North America specially in USA and Canada so that they can train their kids in maths through games.

I plan to train 1 million teachers in my Game Based system of Teaching Maths by 2025.