Interview with Stephen Esketzis on the Meggle App for DJ’s

Today I am presenting another written interview with 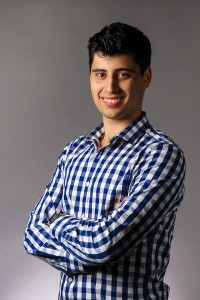 Stephen Esketzis. Stephen is a digital and internet marketer and entrepreneur. Founder of Meggle (Meggle Nightlife & Meggle Masterclass), a platform for DJs and Producers to market themselves and stand out.

1. What gave you the idea to create the Meggle app? Share your story.

Meggle was formed from necessity after going out in Melbourne straight after leaving high school. Initially I noticed there was no app or way for teenagers to find out about ‘guest lists’ when they went into nightclubs (to save money) and for that reason I developed an app to connect the nightclub promoters and the patrons.

From what was initially developed as an app to connect clubs and patrons, later evolved into an app which acted like a directory for nightclubs, bars and pubs all around Melbourne.

2. Was the creation of the app something you outsourced or did you design and code it yourself? What was that process like?

The creation of the app was an interesting one. At the very start we outsourced its coding to India (as I know next to nothing about coding). But not too long after we launched v1.0, we realized that working with Indians is a super tough gig with the language barrier and we were spending more time than saving money by outsourcing our project.

Then I met a young developer (through a part time job on the side actually) and he continued to develop the most recent version of our application. Not only did he do a much better quality job, but because he was locally nased, communication was far more efficient which meant we got the project completed earlier.

3. How have you gone about promoting your app, what are some tactics that have worked for you?

Promoting the Meggle app initially was done through word of mouth and it seemed to catch on quite well. We got some press in national newspapers and tech websites which was a great plus. However to keep the downloads increasing. Social media was a driving force which allowed us to maintain and grow our user base.

4. You mentioned you work a lot on social media, is this a different business? What’s it like to manage massive social media accounts?

I work with a handful of social media clients who want to start maximizing their reach, engagement and ultimately their conversions. I believe social media is currently the best platform to gain leads at the moment (Facebook Ads in particular) as the cost per conversion can be tracked and calculated so that you have the hard data in front of you.

Gone are the days when you had to rely on guessing which SEO traffic was the cause of your success. In saying that, diversifying your social media strategy is very important too. Gary Vaynerchuck someone I looked up to explains this very well. Using each distinct platform (Facebook, Twitter, Snapchat etc.) for the reason it was created will yield the best results.

As for managing such a large social media following, these are 3rd party accounts I have created in my own time through testing different strategies. So one of the largest Facebook pages I own has 297,000 likes, and other pages range all the way down to 40-50k in followers.

By separating followings by niche, it allows you to see what works in different industries and then apply the same techniques to clients and other areas of your business.

My future plans for 2014 and beyond are going to be very busy and action packed. We recently launched Meggle Masterclass megglemasterclass.com which is a platform for DJs and Producers to learn how to market themselves and get DJ gigs, while learning some tips on production from international artists along the way.

So after launching that in September we’ve gotten some great feedback from our first adopters and are going to be expanding our marketing on a global scale and launching some new technologies to make it easier for artists to stand out from the noise.

Something else which is going to be happening in the near future is consolidating our sales funnels across the site. Making sure you have only qualified traffic to your website is one of the most important parts of an online business, so we make sure that we target people who will really get value out of what we offer.