Today I am presenting another written interview with Mark Frickel. Mark is the owner of Floatation International, an online sales and consulting business for people who want to open floatation therapy centers. I’m a huge fan of floating in float tanks, isolation tanks, sensory deprivation tanks, float pods, etc. and believe that everyone can benefit from it. I correspond with people all over the world, but I’m excited at the recent explosion of growth in the USA and Canada. 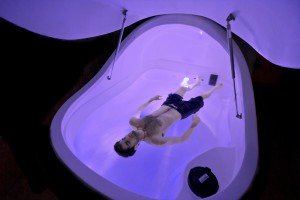 In the late 1990’s I was living in California and finally had an opportunity to try floatation. I had known about floating since I was a teenager, through books written by Dr. John C. Lilly, the medical researcher who had pioneered all of the research into sensory deprivation. Given that I had studied psychology at university, the tank fascinated me from that perspective. My own experiences were very profound, sometimes in a simple but fundamental way, and I knew that this was something I would be interested in for a long time. Like others, I stepped out of the isolation tank thinking to myself, “That was amazing. How come more people don’t know about this?”. It wasn’t until much later, in 2005, that I started becoming active in the community. I began speaking with people and corresponding on the online discussion boards, and decided to create a map-based directory of floatation centers. Three years later I started a conference series in order to revive interest in floatation. At the time, floatation was much more popular in Europe, but had stagnated in North America. There was an interesting convergence at the time: a new manufacturer in the United Kingdom was producing a float pod, a larger and more “inviting” device for the general public to use.

There are many benefits to using a float tank. In a way, there is a paradox in advertising the benefits of floatation therapy because it helps so many things people may think we’re engaging in false advertising! But really the isolation tank is an amazing tool for stress relief, combating fatigue, getting a better night’s sleep and soothing chronic pains and aches from injuries. It helps bring the body into equilibrium and address the issues that are bothering a person the most. Floatation can assist of providing relief from symptoms associated with fibromyalgia, arthritis, and other conditions people suffer from on a daily basis. There has been a lot of empirical research into physiological and psychological effects of floatation, but more needs to be done. Anecdotally, we know that floatation helps many people and is a very pleasurable experience for them, but we’d like to see a new set of larger scientific studies take place. There’s also a lot of uses for creativity and athletic performance enhancement . Members of both of the 2015 Superbowl teams floated before the game, and New England Patriots quarterback Tom Brady owns his own float pod. Back to research: most of the research has been done at universities, and we’re interested in clinical research conducted at floatation centers, using them as living laboratories with existing patients and clients.

Proportionally, floatation was more popular in Europe but that is changing. The greatest rate of growth is in the United States and Canada. Especially Canada. The number of float centers in the US has basically tripled in the past four years, and there are no signs of the interest slowing down. Worldwide, manufacturers’ sales have increased by 40% a year each year over the past several years. The floatation community is experiencing a renaissance, so to speak. We’re also seeing floatation pop up in areas of the world where it was very limited or did not previously exist, as in the Middle East, South America and parts of Asia. And within the US, floating is extending into the South, mid-West states and even rural areas. Surprisingly, there are not that many centers in New York City, a place people might need it the most.

A lot of my energy is currently focused on offering floatation tanks for sale and assisting people in opening float centers. I’m exploring partnerships with experienced float center owners who can offer specialized consulting for people looking to start a float center. You have to approach this from as business aspect as well as a service aspect, otherwise you will not succeed. It’s not merely a case of “build it and they will come”. It’s much more involved than that, and fortunately there are a lot of enthusiastic individuals who are pragmatic enough to achieve their dreams of running a center. There’s much more investment than there was ten years ago, and much more expertise to be leveraged. Most people have the same set of questions, so one of the things I am doing is organizing a webinar to take place at the end of March. (People can inquire via the website to sign up for that). There’s another conference planned for Spring 2016 and there should be some very interesting findings for us to present on, as well as some great workshops to help people who want to enter into the business.

Pretty simple: to keep growing and doing better. There’s always more to be done, and I like to collaborate when I can with the floatation associations, researchers, other promoters and so on. Even when there is competition, there’s often the chance for collaboration. I think most of us are in this for the same reason and that’s because we believe in floatation. Currently, there’s a big need to educate health departments about float tanks and their safety and hygiene. Health codes present an obstacle in some areas of the US, where appropriate regulations do not exist. Another area I would love to spend more time on is organizing a national awareness campaign for floatation, in order to reach a broader audience. Most of my online activities are currently focused on drawing people to my site for sales and consulting, but I would like go back and do more on the public resource end. All in all, it’s a very exciting time to be in floatation.