I recently was browsing a blog when I came across a share icon called ‘Buffer’, so I wanted to share my experience with the Buffer Social Media Tool in this post. In this post I will show you how you can use the Buffer Social Media Tool to schedule your social media posts days in advance! If you would like to sign up for Buffer you can use this link here.

What does Buffer do exactly?

So anyone out there already using social media tools such as Facebook or Twitter already know you can simply just make a new Facebook wall post or Tweet something to your friends or followers, Buffer allows you to do this but it will not post until a time you specify. I could literally make a post tonight and Buffer can be set to post this at a later time tonight, pretty neat huh? This is very useful for people who run an online business, you could setup a week’s worth of social media posts through out the week with both personal and business based posts that will only be submitted during your Buffer schedule.

So let’s get started with the Buffer Social Media Tool

Let’s say you want to send a new Tweet on Twitter at 1pm, 4pm and 6pm. I could submit 3 new Tweets and these would be submitted at the intervals I set within my Buffer Schedule. You can also setup Bit.ly with your Twitter Tweets, this allows you to put more content in your Tweet and less content in your link. Bit.ly simply makes links shorter, very useful! You can see a sample screenshot of what these settings look like here- 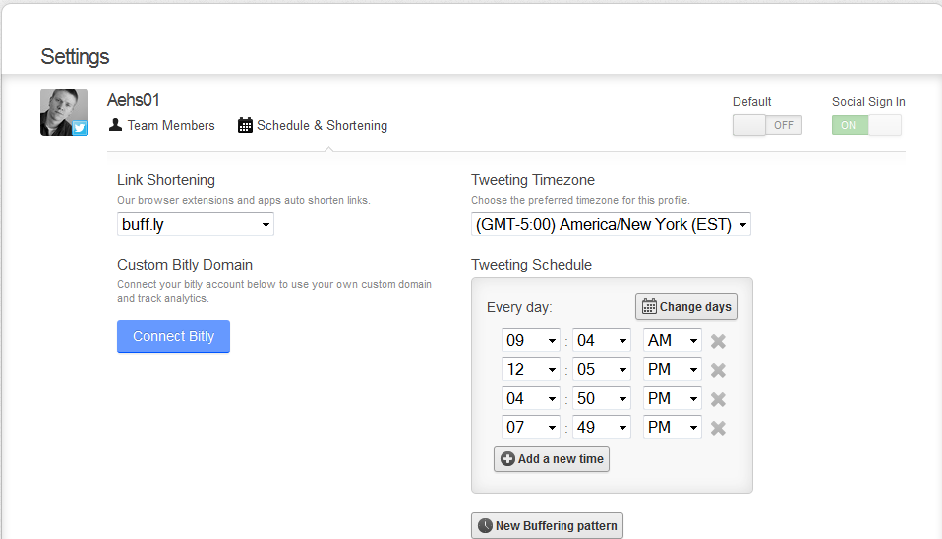 This application is really as simple as that! I like the idea of being able to schedule multiple posts or Tweets ahead of time so I can go off about my business and Buffer will do all the work for me while I’m not at the PC.

I have noticed since integrating with Facebook, I can also Buffer my Facebook posts automatically instead of immediately posting them on my wall. I plan on using Buffer mostly for my Tweets but may start using it for Facebook as well.

The Buffer social media tool also has the capability to add Team Members, you can allow other people to also manage your Buffer posts or content that is posted. This is great for business based accounts! You can have two team members with a Premium membership.

My thoughts on the Buffer Social Media Tool

I really like this tool, it is easy to integrate with both Facebook and Twitter and is an interesting competitor against applications such as HootSuite or MarketMeSuite (I plan on writing about this tools in the future so keep an eye out for that!) I see no reason not to use Buffer if you are someone that is a heavy user on today’s leading social media platforms.

If you have your own WordPress blog you can get your own FREE Digg Digg social sharing plugin that includes support for Buffer just like the one you see on this page! Check that out here.

Go ahead and sign up using this link here, if you use this link I will simply gain the ability to add more posts into my Buffer! I would appreciate it if you used my link to sign up.